The fourth episode of Season 4 is the Play Offs for Group B. In this episode Seahorse, Serpent, Baby Alien, Whatchamacallit, and Crocodile will battle it out to see who will advance.

Tonight was about childhood memories. Joel McHale returned again this week as a Guest Judge. The Serpent Performs The Bones 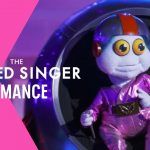 Seahorse Performs My Heart Will Go On

Performance: The Bones by Maren Morris.